Our compulsory teams at Levels 3, 4 and 5 earned 91 medals in total (34 gold) at the Compulsory State Championships held at Victory Gymnastics in Moore. The competitions began on Friday with the Level 5 session where our team dominated the team contest winning the title by nearly a two-point margin ahead of second place finisher Phillips 66. In addition, Sidney Stice and Rylee Godspeed won the all-around titles and the team in total won eight gold, seven silver and seven bronze medals. 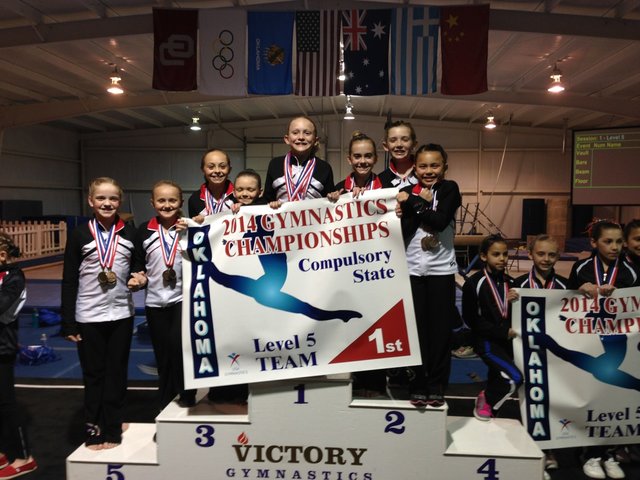 Level 5 Team-STATE Champions
Our Level 3s competed in four different sessions Saturday and had a great competition overall, finishing in third place, just a couple tenths behind the first-place team from Phillips 66. Aanshi Shah and Addisyn Snow won the all-around titles in their age groups, while Saige Keeton, Olivia Tedesco, Ghainaa Abousleiman and Adie Soell were runner-ups. The team ended up with a total of 35 medals, 13 of them being gold.
In the Level 4 competition, which was held in three different sessions, our team fought hard for the title but came just short of it, placing second behind Dynamo Gymnastics. Taryn Lauderdale and Madison Powell won the all-around titles in the 10A and 11B age groups respectively. The team won 13 gold medals, and earned another 10 silvers and 11 bronzes.