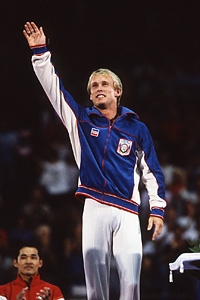 The Illinois native's interest in gymnastics began in grade school gym class where he excelled at acrobatic moves. As a child he participated in many sports, but at every opportunity, Conner could be seen trying handstands. By the time he was a teenager, he had a set of parallel bars in his backyard and a pommel horse in his basement.

In the fall of 1976, Conner moved to Norman, Okla. to attend the University of Oklahoma, and to be coached by Paul Ziert. While at OU, Conner earned 14 NCAA All-America honors and led his team to two national titles.

After graduating with a degree in Journalism in 1984, Conner went into business with Ziert. Today, they own several gymnastics related business interests, including the Bart Conner Gymnastics Academy, where more than 1,000 gymnasts train at every level, from beginning motor skill development to elite athletes aiming for college scholarships, and spots of the U.S. national team.

In 1992, Conner and Ziert took over International GYMNAST magazine, the premier magazine for the sport of gymnastics. 2006 marked the 50th anniversary of IG, which is sent 10 times a year to more than 15,000 serious gymnastics enthusiasts in 70 countries.

In 1996, Ziert and Conner formed Grips, Etc., a gymnastics supply company. That same year they opened up a new office building and factory in Norman to produce gymnastics grips, t-shirts, shoes and more.

In 1996, Conner married Romanian Olympic champion Nadia Comaneci in a lavish state wedding in Bucharest, Romania. Today, Conner and Comaneci are involved in several charities including the Executive Board of Special Olympics International, and the Board of Directors of the Muscular Dystrophy Association. 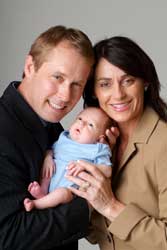 Along with some of their fellow Olympic medalists, Conner and Comaneci contributed a chapter to an inspirational book called "Awaken the Olympian Within."