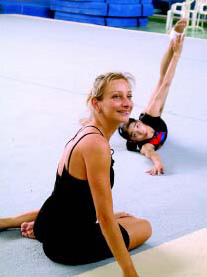 Bart Conner Gymnastics Academy is proud to have its floor routines designed by Adriana Pop, the world's most sought-after gymnastics choreographer.

The Romanian-born Pop spends one month each fall in Norman, creating floor exercise routines for BCGA gymnasts in Levels 7-10. (Gymnasts in Level 6 and below all perform the same compulsory routine.)

Pop lives and coaches in Marseille, France, but travels extensively designing routines for the national teams of Romania, China and Australia. In the United States, she choreographs exclusively for the Bart Conner Gymnastics Academy.

Pop has created routines for some of the world's best gymnasts, including reigning world champion Cheng Fei of China and Olympic floor exercise champion Catalina Ponor of Romania.

The floor exercise is one of four events in women's gymnastics. Unlike the vault, uneven bars and balance beam, the floor exercise routine is set to music. While in Norman, Pop can often be found at Borders Books & Music listening to CDs, searcing for a piece of music that moves her.

"The music is important for me because from the music comes the idea for the routine," Pop says. "I follow the theme of the music, but then I also get inspiration from the girl, her eyes, the color of her leotard, everything at that moment!"

Pop works with French musical engineer Sebastian Artero, who remixes the piece to remove voice and set it under the one minute, 30 second time limit. Each routine takes approximately five to six hours to create, which she divides into two creative sessions.

Though Pop is known for her work with the best gymnasts in the world, she enjoys the opportunity to work with the gymnasts at Bart Conner Gymnastics Academy.

"Here I don't have as much pressure because I can put a lot more choreography in," she says. "In international gymnastics, the rules are so complicated that some of the gymnasts have to do so many tumbling passes and so many specific leaps and jumps - I have less freedom to create.

"But the creative process for me is the same when working with all gymnasts. When I do a floor routine I give the same effort — it doesn't matter what level."