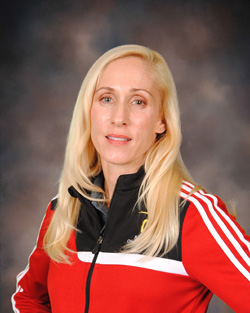 Heidi Brown grew up in Oklahoma City, OK where she attended Dynamo Gymnastics.  She was coached by Olympic coaches Peggy
Liddick and Steve Nunno. Heidi was a class 1 level gymnast for 7 years.  She competed extensively within the United States and won
two class 1 state Championships and was a two-time Western National qualifier.  Heidi earned a full scholarship to the University of Denver in 1991, and transferred to the University of Oklahoma in 1992 where she also competed on a full gymnastics scholarship. Heidi began coaching at Bart Conner Gymnastics in 2013.  She works with Preschool, Pre-team and the Xcel team.